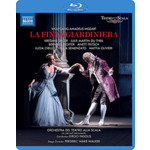 Despite various attempts between the composition of Lucio Silla (1772), the last work he wrote for Milan, and Idomeneo, re di Creta (1781), the grand opera for Munich whose success led ultimately to his move to Vienna, Mozart had only two real occasions on which to establish himself in opera, the sphere most congenial to him. They occurred just months apart, both in 1775: on 13 January La finta giardiniera, a dramma giocoso, was premiered at the Salvatortheater in Munich, then on 23 April the serenata Il re pastore was staged at the archbishop's palace in Salzburg. The libretto chosen for the comic opera commissioned by the court of Maximilian III, Elector of Bavaria, had previously been set to music by Pasquale Anfossi in Rome in 1774 and its authorship remains obscure (while it is often ascribed today to Giuseppe Petrosellini, this attribution is far from certain). Apart from the opening Introduction, two duets and the finales of each act, the narrative structure is entirely made up of arias and the libretto contains many elements typical of the comic opera of the Goldoni tradition: first and foremost, the inclusion of serious, comic and mezzo carattere or 'intermediate' character types (respectively Arminda and Ramiro; the Podestà, Nardo and Serpetta; and Sandrina and Belfiore, the lovers at the heart of the action); then - as a consequence of this - a mix of different expressive and stylistic levels, including an element of caricature; and lastly, the use of themes such as that of the adoption of false identities with, in this case, the figure of the noblewoman in disguise, a victim of jealousy, modelled closely on her counterpart in Goldoni and Piccinni's La buona figliuola (1760).