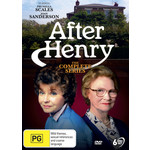 After Henry is a BAFTA-nominated comedy that follows the comfortable middle-class lives of three women... except that, for one of them, life isn't all that comfortable. Sarah has been left pretty well provided-for by her late husband, but she has also been left with a demanding mother and a prickly adolescent daughter who craves independence - just as long as mother is there to clear up the mess... Sarah's friend and employer, Russell, owner of Bygone Books, becomes agony aunt to all of Sarah's home dramas.

Starring Prunella Scales (Fawlty Towers) as the put-upon Sarah and Joan Sanderson (Please Sir!) as Eleanor, her interfering, waspish mother, After Henry is written by multiple BAFTA-nominee Simon Brett (Rosemary and Thyme), and directed by sit-com legend Peter Frazer-Jones (Man About the House, George and Mildred) and BAFTA winner Liddy Oldroyd (Drop the Dead Donkey). This release contains every episode of After Henry from Series 1- 4