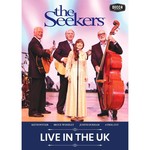 The Seekers
Live In The UK DVD

Four months after the sold-out success of The Seekers' Golden Jubilee 'Farewell' Tour of Australia in late 2013, the group and their team reconvened to do it all again in the United Kingdom in 2014, winding their way through Wales, Scotland and England with a 15-date sold-out tour.

When Judith Durham, Athol Guy, Keith Potger and Bruce Woodley took to the stage for the last time, the audience was on its feet clapping and cheering for several minutes before they even sang a note. Far from any sense of sadness or regret, the mood on this tour was one of celebration and appreciation, both for the group and their loyal fans.

This historic Album & DVD marks the final time that Australian music phenomenon The Seekers toured in the country where their global success story began.

The DVD 'Live In The UK' contains a never-before-seen 30-min interview with all four members of The Seekers, reminiscing about their hit songs and previous tours around the world.