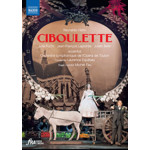 While Reynaldo Hahn is associated with light musical theatre, his most famous opérette, Ciboulette, was not the result of a creative approach that had already been fruitful in this vein but, on the contrary, was a first attempt that could have been the last in a career thus far devoted to serious genres.

Although Ciboulette remains the most emblematic opérette in the history of the Opéra Comique, it neither belongs to its repertoire nor to the heyday of French operetta as it emerged during the interwar period, nearly 40 years after the death of Offenbach, the founding figure of the genre.

Even if Ciboulette, with its fresh and spruce title, depicts the dawning of sentiments between two young people - the urban aristocrat and the little farm girl - it was written by an experienced and scrupulous composer of almost 50 years of age.

Despite these paradoxes, Ciboulette is an eminently Parisian work, composed by a figure of the cultural life of the first half of the 20th century, at home in aristocratic salons and music halls, in museums and newspaper offices.