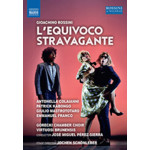 No opera has been performed at Rossini in Wildbad as often as L'equivoco stravagante, so it was the perfect choice for the festival's 30th anniversary in 2018, being emblematic of the contribution the cultivation of Rossini in Germany has been able to make to the international Rossini revival. It is thanks to these efforts and the resulting domino effect that L'equivoco has attained its current, modest level of dissemination. The reason Rossini's first, two-act opera buffa was staged in Bad Wildbad from 1993 onwards was its very obscurity (the previous performance had been in Naples in 1974). Under its new artistic director Jochen Schönleber the festival, founded in 1989 and still in its infancy, was consciously looking for rarities - ideally operas that hadn't already been given an airing at the Rossini Opera Festival in Pesaro. I was familiar with the opera from a recording by RTSI Lugano, found its music compelling and so suggested it, not least so that I could see a staged performance for the first time. We were, of course, aware that the RTSI recording - and therefore the Accademia Chigiana in Siena's performance material 'revised' by Vito Frazzi (1888-1975) - was radically different from Rossini's version. We ordered a microfilm of a manuscript copy of the opera housed in Florence, and the conductor Rüdiger Bohn embarked on a laborious revision of the existing material. Four numbers that were missing entirely were edited by Guido Johannes Joerg. But one of the main errors was not eradicated just yet. The manuscript copy revealed that Ernestina was a contralto, but a soprano had already been hired on the basis of the old edition. Premiering on 8 July 1993, this corrected soprano version of the opera received five performances in the Kursaal Bad Wildbad, in a joyous staging by Thorsten Kreissig, with Heidi Wolf (Ernestina), Mikhail Lanskoi (Gamberotto), Reginaldo Pinheiro (Ermanno), Hernan Iturralde (Buralicchio), Sonia Malta (Rosalia) and Matthias Klink (Frontino). The result was compelling and such a success that we decided to revive the opera the following year, this time in the contralto version (prepared with reference to a further manuscript copy housed in Brussels), whose deeper tessitura lends the alleged castrato a certain plausibility. Whilst the same people sang Buralicchio and Rosalia as in the previous year, Heidi Brunner (Ernestina), Mark Holland (Gamberotto), Omar Jara (Ermanno) and Alexander Judenkov (Frontino) were all new. Rüdiger Bohn conducted three performances, starting on 19 July 1994.

Recorded at the Königliches Kurtheater, Bad Wildbad, Germany, 26 and 29 July 2018