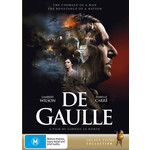 Writer/director Gabriel Le Bomin's spectacularly-mounted biographical drama DE GAULLE stirringly depicts a crucial period in the life of one of modern French history's most famous figures. It is May 1940, where the war between Germany and its neighbours has intensified. Shockingly, the French army collapses, and Hitler seizes Paris. The government is in panic and considers accepting defeat, but recently promoted two-star General Charles de Gaulle (The Translators' Lambert Wilson), wants to change the course of history..