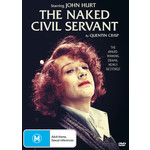 Adapted from his best-selling autobiography, THE NAKED CIVIL SERVANT tells the coming-of-age story of Quentin Crisp, a homosexual trying to live an openly flamboyant and gay lifestyle in the intolerant pre-war years. It is easy to see why Crisp is considered by some to be the 20th century's equivalent of Oscar Wilde, but it's his unflinching desire not to compromise his lifestyle to suit the conventions of society that makes this play by turns funny, tragic and heartwarming.

First shown in 1975, THE NAKED CIVIL SERVANT won John Hurt a BAFTA for Best Actor for his portrayal of Crisp and director Jack Gold won the Academy's Desmond Davies Award, for his outstanding creative contribuition to television. Though previously released on DVD this edition has been digitally remastered and cleaned-up from the original elements and has never looked this good.

THE NAKED CIVIL SERVANT came in at number 4 in the British Film Institute's TV 100 poll, coming second in the Single Drama category.