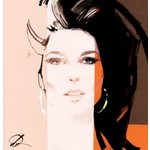 Bobbie is notable as one of the first female country artists to compose and produce her own material. During her five-year tenure at Capitol, she penned at least two songs that have become certified classics, 'Ode to Billie Joe' and 'Fancy', among dozens of original compositions.

Bobbie released eight Capitol albums in total, heralded by the smash hit debut 'Ode to Billie Joe' (Which displaced Sgt. Pepper's Lonely-Hearts Club Band from the top of the charts in the US). Delta Sweete, her third, is another highlight. MOJO magazine listed it in their top 500 greatest albums of all time and memorably described her as the 'JD Salinger of rock n roll.'

In 2018 Universal released Capitol years boxset consisted of 8CDs, this is the first ever large-scale retrospective containing the first UK reissues of her albums in their entirety - supplemented by 76 previously unreleased demos, outtakes and alternate takes from all Bobbie's Capitol albums. This new format is a cut down version of the boxset and feature a selection of the unreleased bonus material from the 8CD package, including an alternate take of Sunday Best, demo of Hurry, Tuesday Child, Mississippi Delta alternate version and many more.