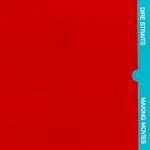 Singer, songwriter and ace guitarist Mark Knopfler is the impressive sum of several very appealing parts. His voice is a smoky mixture of Bob Dylan's acidic whine, Tom Waits' tubercular snore and J.J. Cale's breathy, marbles-in-the-mouth whisper. He writes such songs as "Sultans of Swing" and "Once upon a Time in the West" with the cinematic flair of Bruce Springsteen, the hall-of-mirrors imagery of classic Dylan and the slashing thrusts of Neil Young's bayonetlike realism. Finally, Knopfler's guitar style is a shotgun wedding of jazzy chording and harmonic tangents descended from Django Reinhardt and Wes Montgomery, the no-nonsense electric blues of B.B. King, Jimi Hendrix' string-bending sensuality and James Burton's country-pop sheen.

On Dire Straits' first two albums, Knopfler wore his influences proudly on his sleeve. But when he pinned them on the band, they stood out like scarlet letters. Dire Straits and Communiqué were like roll calls of the star's patron saints, yet all too often Knopfler's hero worship overshadowed both the richly romantic tapestries of his tunes and the tasty team playing of bassist John Illsley, drummer Pick Withers and now-departed rhythm guitarist David Knopfler.

On Making Movies, Mark Knopfler pushes back those influences, rolls up his sleeves and knuckles down to the business of cutting a Dire Straits disc that's far greater than the sum of its parts. "A house of cards/Was never built for shock," he admits in "Solid Rock," the snarling, guitar-driven number that best describes what the new record is all about. Indeed, compared to his crystalline elegance and fragile introspection on the first two LPs, the creator of Making Movies now seems as bold, confident and determined to take chances in life, love and rock & roll as the brassy rollerball queen he watches with such fascination in "Skateaway." On this album, Knopfler is making "movies" - i.e., songs, some of which remind us of films: Carousel, Romeo and Juliet, West Side Story, Cabaret, et al. - not just acting them out.

And what a difference the right producer makes! On 1978's Dire Straits, Muff Winwood simply succumbed to the bleached-out tonalities suggested by the cold, misty blues of "Down to the Waterline" and the lurid yet limpid pink-neon afterglow of "Wild West End." (On the import LP The Honky Tonk Demos, Dire Straits' own scrappy 1977 eight-track demo of "Sultans of Swing" conjured up the composition's carnival atmosphere better than their Winwood-produced hit single did.) For Communiqué, Jerry Wexler and Barry Beckett merely enriched the R&B textures in the group's sultry sound, marching Knopfler's instrumental chops into the breach at the expense of his material and the sorely underrated rhythmic tension between Illsley and Withers.

Jimmy Iovine, who coproduced Making Movies with Mark Knopfler, succeeds where the others failed: he builds the album from the songs up. True, the addition of E Street Band pianist Roy Bittan brings out colors that were only implied in David Knopfler's workmanlike strumming on Dire Straits and Communiqué. But it's Iovine who puts all the pieces together here: gritty guitar runs, muscular drumming and bass playing, sympathetic keyboards, sensitive and assertive singing. Then, after the groundwork has been laid and the shots set up, Mark Knopfler steps forward to star in and direct each highly emotional but never cheaply melodramatic scene.

Knopfler fires most of his big guns on side one, which begins with a riveting, eight-minute romance called "Tunnel of Love." Bittan's opening quotation from Rodgers and Hammerstein's "Carousel Waltz" quickly metamorphoses into a brief, cascading piano figure that carries us straight into the boardwalk world of middle-period Bruce Springsteen. There, amid the deafening roar of roller coasters, cars and people who are frantically racing toward nowhere, a young man and woman find safety and solace for a few precious hours. But where Springsteen would probably have turned their love into a grandstand play, Knopfler simply takes what he can get and lets it go ("I could have caught up with her easy enough but something must have made me stay").

Throughout "Tunnel of Love," Mark Knopfler dramatizes this close encounter by using his guitar as a Greek chorus. The singer practically spits out the early verses while dodging his own instrumental licks as they ricochet against Illsley and Withers' solid wall of sound. Later, as Knopfler walks alone through the "carousel and the carnival arcades," waiting for another night and another girl, he wraps his voice like a ratty old raincoat around Bittan's gently tinkling piano and the long guitar solo that ends the track. Somehow, the evocative moan of the artist's guitar suggests a truth much deeper than the carnival-as-life metaphor has revealed.

As fine as "Tunnel of Love" is, Making Movies' masterpiece is its second song, "Romeo and Juliet." For once, Knopfler's words coalesce into something more than a mood, a clever skit ("Les Boys") or a neat vignette ("Skateaway"). Lyrically, he breaks through and makes us care, even cry, for the street kid who's lost his girl because her dream of success came true and his didn't (though they shared the same dream). Now she doesn't need her lover anymore, and when he comes around, she crushes him with her casual "hey it's Romeo you nearly gimme a heart attack/He's underneath the window she's singing hey la my boyfriend's back/You shouldn't come around here singing up at people like that/Anyway what you gonna do about it?" All he can do is realize that she's suddenly in another league, that she thinks of him (if at all) as little more than a comic figure from her past.

In the choruses, Mark Knopfler reaches peaks of passion he's never before attained:

Juliet the dice were loaded from the start
And I bet and you exploded in my heart…
Juliet when we made love you used to cry
You said I love you like the stars above I'll love you till I die
And there's a place for us you know the movie song
When you gonna realize it was just that the time was wrong Juliet?

But, of course, such pleading is useless - tragic, devastating, even funny, yet ultimately useless. We're moved, but the subject of the song certainly isn't.

Musically, Knopfler cradles "Romeo and Juliet" with a tender melodic reprise from Bruce Springsteen's "Jungleland," which he plays beautifully on a National guitar, giving the tune the timeless feeling of, say, Rod Stewart's "Mandolin Wind." There are no hot lead-guitar breaks here. Roy Bittan's piano keeps to the shadows while the rhythm section maintains a soft shuffle, jacking it up for the potent choruses. The combination of Jimmy Iovine's understated production, Mark Knopfler's incredibly powerful singing and the strength of the story itself make "Romeo and Juliet" the greatest victory on a record not lacking in triumphs.

Two of Making Movies' other compositions are also boy-meets-girl numbers. "Hand in Hand" explores ground similar to "Romeo and Juliet" but can't begin to match the latter's force. In the randy and exhilarating "Expresso Love," however, Knopfler is so knocked out by the intensity of his relationship with his girlfriend (expressed in a cup-of-coffee metaphor!) that he can't wait to gulp her down again. "I don't want no sugar in it," he shouts. "Thank you very much/All wired up on it all fired up on it."

"Solid Rock" finds the singer in an affirmative, philosophical mood, ready to straighten out both his life and his music with a healthy dose of "solid rock." "Skateaway," a marvelous miniature, could serve as an anthem to roller skaters everywhere, while "Les Boys" - a strange and surprising anticlimax on an album this good - trots out Cabaret, apparently just for the hell of it.

Guitar freaks who genuflected over every riff on Dire Straits and Communiqué may be disappointed at what seems like a shortage of raveup Knopfler solos on Making Movies. There are a few (in "Tunnel of Love" and "Solid Rock"), but the beauty of the artist's current playing is that each note and phrase is woven into the fabric of the tales he tells. Unlike the other LPs, this one boasts songs, not solos.

More important, Making Movies is the record on which Mark Knopfler comes out from behind his influences and Dire Straits come out from behind Mark Knopfler. The combination of the star's lyrical script, his intense vocal performances and the band's cutting-edge rock & roll soundtrack is breathtaking - everything the first two albums should have been but weren't. If Making Movies really were a film, it might win a flock of Academy Awards.
4 / 5 Rolling Stone Magazine.