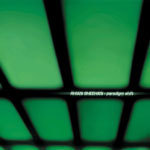 Rhian's talent was unearthed by Wellington-based LOOP Magazine with their series of cover CD's. With 'Paradigm Shift', Rhian unveils a broader view of his unique sound - acoustic melancholy meets synthesized soundscapes in an electronic mind meld. Featuring guest appearances from vocalist Lotus (who featured on The Nomad's single "Where Are You"), Christchurch all female Hip Hop crew Sheelahroc, and a cast of musicians including Shapeshifter's Devon Abrams and Trinity Roots' Darren Mathiassen.

An emotive downbeat treat, the album is lushly arranged and exquisitely produced by George Nepia III and Jeremy "50Hz" Geor. More than an assembly of simple sonic elements, this is an ultimately unique and personal musical vision that is the Paradigm Shift.