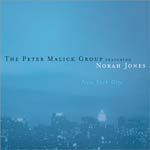 This American imported disc is a re-discovered gem, originally recorded in 2000. Norah performs vocals and piano on all tracks!

'New York City', the mini album from The Peter Malick Group featuring Norah Jones (5-time Grammy Award-winner) was recorded in September-October of 2000. The album has special meaning in the hearts of all who were involved in the project. Peter Malick, a respected blues singer/ songwriter and guitar player, walked into a club in New York City's Lower East Side and heard Norah Jones, a then 21-year old unknown singer. Over the next few months they became friends and a tour of New England Blues clubs culminated in these two recording sessions.

The title track "New York City (Such A Beautiful Disease)" was written by Peter Malick, who wrote 4 of the 7 songs for this EP. This mini-album was produced by Peter Malick and executive produced by Grammy Award-winner Hugh Fordin.

'New York City' features a cover of Bob Dylan's hit "Heart of Mine" and "All Your Love" which is a standard Chicago Blues song performed by Magic Sam.