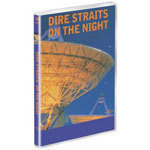 Dire Straits
On the Night (DVD)

Recorded during Dire Straits' last tour in 1992, in France, this concert confirms well a thing: Mark Knopfler is one of the most talented guitarists of his generation. He formed his legendary band, fifteen years ago, and after all this time, he didn't lose anything from his inspiration, his sharpness and his talent. Maybe, you can blame him for not being rousing enough for the faster songs such as "Money for Nothing" or "The Bug" but he knows very well how to be peaceful and calm for the gorgeous ballads "On Every Street", "Brothers in Arms". Moreover, he's supported by a handful of musicians in great form, especially the drummer and the percussionist. The concert unanimously acclaimed by the fans, reaches its highest point with the wistful and entrancing "Local Hero".

The Concert in Central Park