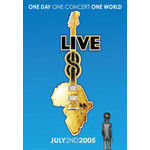 The 'Live8' DVD brings together performances from the amazing series of concerts which took place around the world on the 2nd July, 2005.

This 4-disc set contains three discs of live footage taken from the 'Live8' shows staged in London and Philadelphia alongside key highlights from the seven other events staged across the world. Every artist who performed at London's Hyde Park and Philadelphia's Museum Of Art appear on the DVD, many of them with their full sets.

Also threaded through the U.K. and U.S. acts are performances from artists who appeared at the 'Live8' concerts in Rome, Paris, Berlin, Toronto, Johannesburg and Moscow. Tracks from Green Day, Brian Wilson and Roxy Music in Berlin and Neil Young in Toronto are included along with the Pet Shop Boys in Moscow, Duran Duran in Rome, and Placebo and Muse in Paris.

Disc 4 features exclusive extras including a never-before-seen backstage documentary filmed at Hyde Park, Pink Floyd's 'Live8' reunion rehearsal, more acts from the 'Live8' global concerts including McFly and Bjork in Tokyo, films by The Who and Travis and a contribution from Ricky Gervais.

The special features section offers highlights from Edinburgh's Final Push concert at Murrayfield on July 6, which includes performances from James Brown, Travis and The Proclaimers.

EMI and the 'Live8' organisation have agreed that a generous royalty from sales of the 'Live8' DVD will go to the Band Aid Trust for the relief of hunger and poverty in Africa.

'Live8' was held on 2 July 2005. Nine simultaneous, free concerts starring the cream of international rock and pop artists were staged in London, Paris, Berlin, Rome, Tokyo, Moscow, Toronto, Johannesburg and Philadelphia. The concerts acted as a starting point for "The Long Walk to Justice" in support of the "Make Poverty History" and "Global Call to Action" campaigns and was timed to focus attention on the critical decisions made by the G8 summit four days later.

"You're such a lovely audience, we'd like to take you home with us" sang Bono. Now the two million-strong live audience and 5 billion viewers around the world can take 'Live8' home with them...

Disc 4 :- Extras
The Walk to Edinburgh -- Highland Fling
The Proclaimers -- I'm Gonna Be (500 Miles)
Wet Wet Wet -- Love Is All Around
1 Giant Leap -- My Culture
George Clooney
Annie Lennox -- Sisters Are Doin' It For Themselves
Bono
Nelson Mandela
Bob Geldof -- The Great Song Of Indifference
The Thrills -- Santa Cruz (You're Not That Far)
Herbert Gronemeyer & Claudia Schiffer
Midge Ure & Eddie Izzard -- Vienna
Texas -- Say What You Want
Katherine Jenkins -- Nessun Dorma
Travis -- Why Does It Always Rain On Me?
James Brown -- I Got You (I Feel Good)
James Brown & Will Young -- Papa's Got A Brand New Bag
Bob Geldof, Bono, Midge Ure
Murrayfield crowd -- Flower Of Scotland
McFly -- All About You (Live 8 Tokyo)
Good Charlotte -- Lifestyles Of The Rich And Famous (Live 8 Tokyo)
Dreams Come True -- Love Love Love (Live 8 Tokyo)
Bjork -- All Is Full Of Love (Live 8 Tokyo)
Tim McGraw -- Live Like You Were Dying (Live 8 Roma)
Faith Hill -- Breathe (Live 8 Roma)
Shakira -- Whenever, Wherever (Live 8 Paris)
Audioslave -- Black Hole Sun (Live 8 Berlin)
Audioslave -- Like A Stone (Live 8 Berlin)
"Who Are You?" Film -- The Who
"Why Does It Always Rain On Me?" film -- Travis
Ricky Gervais -- Enjoy the day
Backstage at Hyde Park
Pink Floyd rehearsal and interview footage

In the Flesh: Live (Limited Edition)