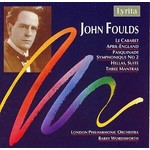 "A remarkable disc, and an essential introduction to a composer whose music cries out for greater recognition."
(MusicWeb Feb 2004)

"I have always warmed to John Foulds. Firstly he is a Manchester composer and I have a number of connections - all of them happy - with that great city. Secondly, I regard him as one of the most undervalued of British composers. And finally he is one of the very few composers, along with Sorabji, Messiaen and perhaps Ives whom I regard as (possible/probable) geniuses.
There are precious few CDs available of Foulds' music. The present Lyrita disc was originally issued in 1993 until recently only available at Harold Moore's record shop in London but now on general release. There has always been this worry that Lyrita would 'fold' as a CD company and all the valuable British Music archive be lost. So it is encouraging that this disc and many others are to be re-presented to listeners.
It has been suggested by one reviewer that April-England is 'light-hearted' - although that same writer goes on to suggest that "the scoring is transparent and masterly, the sound world entirely of this isle." Further he mentions the debt that this music appears to owe Percy Grainger. Yet why would this make it light-hearted? This is certainly not the Gumsuckers March or Handel strolling along the Strand.
To my ear the nature of Foulds' work is a 'paean of joy' that spring has returned to the earth: this is music revelling in the sheer 'boundless fecundity (and) opulent burgeoning of springtime.' There is almost a mystical quality to this piece that certainly is out of place filed under the label 'light' even if the music is approachable....rush out and buy this CD"
(MusicWeb Sept 2007)

"A remarkable disc, and an essential introduction to a composer whose music cries out for greater recognition."
(MusicWeb Feb 2004)