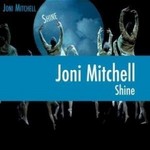 Legendary singer/songwriter Joni Mitchell offers 'Shine' - a 10-song collection which is her first release since her "retirement".

Described by Mitchell as "as serious a work as I've ever done," 'Shine' presents beautiful melodies, dark lyrics and a sparseness that recalls and even progresses beyond some the artist's most seminal recordings. Much of the lyrical content reflects Mitchell's social and theological consciousness and her longtime plea for the health of the planet.

Born out of a burst of creative energy, 'Shine' is one of three new artistic endeavors launched by Mitchell in 2007. The first, 'The Fiddle and the Drum', a ballet based on Mitchell's music, debuted with the Alberta Ballet in Calgary, with Mitchell serving as co-creator and artistic director. The second is a politically charged visual art exhibit by Mitchell that will debut in New York.

Two songs included on 'Shine' - "If" (based on Mitchell's favorite poem by Rudyard Kipling) and "If I Had a Heart" - were featured in the 'The Fiddle and The Drum' when it premiered on February 8, 2007. It was then that The New York Times described Mitchell's "If I Had a Heart" as "one of the most haunting melodies she has ever written." The album also contains a joyous reinterpretation of her classic hit song, "Big Yellow Taxi" which was also featured in the ballet.

All music on 'Shine' was composed, arranged and produced by Joni Mitchell. All lyrics were written by Joni Mitchell except "If" which was adapted from Rudyard Kipling's "If."