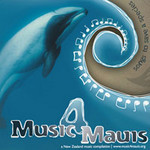 Various Artists
Music 4 Mauis: Songs to Save a Species

'Music 4 Mauis' is an exciting venture that unites a love for New Zealand music with caring for our native dolphins.

Founded by Gemma McGrath in 2007 in response to NZ's most endangered species, the Maui dolphin, being on the brink of extinction (we've only 100 or so alive!), 'Music 4 Mauis' draws attention to this tragic situation, which is mainly due to recreational and commercial set netting and trawling in our inshore shallow waters - Maui and Hector habitat.

Maui and Hector's don't move far from their local stretches of coast and never go beyond 100m deep. They are as unique to NZ as the kiwi, ancient wisdom connects their wellbeing to ours and they need us now, more than ever!

'Music 4 Mauis' is the first in an intended series of music compilations, and all of the artists involved - The Black Seeds, Don McGlashan, Pitch Black, Fur Patrol, Minuit, Sola Rosa, Gasoline Cowboy, The Bads, Flip Grater, Ragamuffin Children and Ariana Tikao - have given their tracks for free in an effort to aid Gemma to raise awareness to the plight of dolphins.

The Guards Themselves
more suggestions…