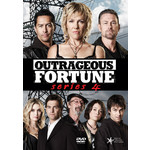 The Wests are back for a fourth season of New Zealand's best loved comedy drama. This year, Cheryl battles the forces of Wolf to defend her kids & castle, but as family tensions erupt, the worst villain may be the enemy within...

Episodes :-
1. Thinking Makes it So
Cheryl fights a child to save a child, as a Wolf comes knocking at her door. And one of the Wests has amazing super powers.

2. The Edge of Husbandry
Cheryl goes to war with Wolf, as Pascalle's body is revealed to be a deadly weapon.

3. As Much Containing
Whatever's in that container, Wolf is behind it; Cheryl knows it's dodgy; Van just wants to know; and Jethro sees the opportunity for fun and games.

4. Revenged Most Thoroughly
Cheryl loses a child and gains a mission; and Grandpa goes to the movies to seek and destroy the Rita Rooter.

5. Remorseless, Treacherous, Lecherous
Pascalle sees something that's exactly like a miracle except creepy and disturbing, as Loretta takes on the big bad Wolf.

6. A Good Child and a True Gentleman
When Cheryl's defences are down, Wolf storms the castle, and Baby Jane gets an unlikely babysitter.

7. What is a Man
Van and Munter find their turf is under threat, as Grandpa has to save Judd from critical sperm build up.

8. Guilty Creatures
Cheryl's dodgy dealings come back to haunt her, and no one is safe from the most powerful force in the land.

9. Most Foul, Strange and Unnatural
Wolf suspects a foul plot afoot, as Van and Munter both get rude awakenings.

10. The King, the King's to Blame
Cheryl blames Wolf for his lies, but discovers instead a terrible truth, and all in all, a hell of a lot of stuff happens on Kasey's birthday.

11. Most Valiant
Cheryl takes on Sheree, but hasn't reckoned on a guardian angel. And Van is jealous as Munter takes inspiration from his new mentor.

12. Let Them Throw Millions
When Pascalle is blessed, Loretta feels cursed. And Van has to do some very important remembering of roots past.

14. Rest Her Soul
Jesus wants Baby Jane, but Cheryl isn't so sure, as Judd sets out to save Kasey from the Bahama Triangle.

16. A Sister Driven Into Desperate Terms
Loretta wants to save the world, but is she the girl who cried wolf?

17. Dangerous Conjectures
Some mysterious happenings and rude surprises mean Cheryl, Van, Pascalle and Grandpa all get to count the cost of love.

18. Who Comes Here?
As the Wests take on the Greegans, battle lines are drawn, blood is spilt, and pav goes flying. But who will emerge victorious?