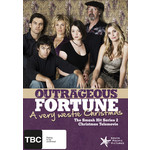 It's the festive season once again in New Zealand and the West family is divided on their annual Christmas-New Year sojourn to their favourite spot, Tutaekuri Bay.

As we revisit the family: Cheryl is a walking emotional disaster zone; Van is raving to Aurora about how choice Tutaekuri Bay is; and Jethro has decided that this is the year he will decline the tempting offer of camping. Meanwhile Pascalle is having a major ethical dilemma; Grandpa is full of life and mischief since his tumour operation; and Loretta, who recently discovered sex, is looking forward to staying home and turning the house into a sexual gymnasium for her and Hayden.

Thus the cast of characters are assembled, poised and ready to celebrate.

And , as always, there's beach volleyball, barbecues, Christmas lunch by the beach, plenty of booze, the traditional bonfire... and a touch of legendary Kiwi rock band Hello Sailor.