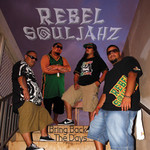 Rebel Souljahz
Bring Back the Days

The long-awaited follow-up to 'Nothing to Hide' was well worth the wait. 'Bring Back the Days', is jam-packed with 13 all-original songs, with guests Logan Bell and Leon Davey from Katchafire.

Rebel Souljahz released their debut CD, 'Nothing to Hide', in early 2008 and it hit the music scene like a hurricane. The CD spent 50+ weeks on Billboard magazine's Top Reggae Albums chart and was named by Billboard as the #8 best selling Reggae album of 2008.

The long-awaited follow-up to 'Nothing to Hide' has finally arrived and it was well worth the wait. 'Bring Back the Days', is jam-packed with 13 all-original songs that blow the doors off of any preconceived notions that Rebel Souljahz might be just a "Jawaiian" party band. Rebel Souljahz has matured, having distilled their creative talents into a finely-tuned vocal group capable of offering a strong variety of musical styles and messages. A message that threads its way through the project is commitment and the power of being in a relationship with the topic of marriage even coming up in the songs "Be My Wife", "I Do", and "She's Mine".

The boys from Katchafire make a powerful contribution to the song "Slow Down", a track with a steady rockin' groove, a catchy horn line from Katchafire's Jamey Ferguson, and a splendid blend of vocal performances from all four members of Rebel Souljahz along with Logan Bell and Leon Davey from Katchafire.