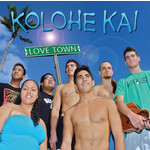 Fresh off the success of their 2009 debut album, Kolohe Kai delivers BIG with their sophomore effort, 'Love Town'.

This project features 12 brand new and all original songs written by Kolohe Kai's very own Roman De Peralta. 'Love Town' was produced by Imua Garza & Brett Ortone, the same production team responsible for the band's debut album 'This is the Life'.

'Love Town' starts off strong with the title track, an upbeat feel-good song with a positive message and continues on a journey showcasing the musical depth and noticeable maturity of Kolohe Kai.

Guest vocalist Mailani, formerly of Keahiwai, shines on the duet "The Lighthouse", a song about a couple who are able to re-ignite their love after seemingly drifting apart. Bubba of Rebel Souljahz fame adds his talents to the track "At First Sight". 'Love Town' is a strong sophomore offering that will no doubt increase the popularity of Kolohe Kai.

Somewhere Over the Rainbow - The Best of Israel Kamakawiwo'ole

Bring Back the Days
more suggestions…