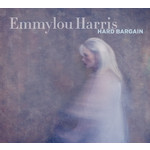 The follow-up to Emmylou's acclaimed 2008 release 'All I Intended to Be' comprises 11 wonderful new songs by Harris plus two fine covers. This deluxe edition includes a DVD featuring performances and interviews.

'Hard Bargain' is the follow-up to Emmylou Harris' acclaimed 2008 release, 'All I Intended to Be'. The new album, which comprises 11 wonderful new songs by Harris as well as two fine covers, was produced by Jay Joyce (Cage the Elephant, Patty Griffin).

"We did the whole record in about a month, which is quite unusual for me. But I had all the material beforehand. I'd written 11 of the 13 songs and I really wanted to include two more by other writers," Harris explains. "One of the covers is Ron Sexsmith's Hard Bargain which I absolutely love. The other is by Jay Joyce, called Cross Yourself.

"We did the whole thing with just three musicians, me being one of them. Jay, the producer, and Giles Reeves play everything between them. It's not a stripped down record though; there's only one song that's a little bare bones. I'm basically a slow ballad-y person, but Jay managed to really move the songs up a bit. But they still have the same emotional feel."

This deluxe edition of the album includes a DVD featuring six performances interspersed with interviews.

The Lost Notebooks of Hank Williams