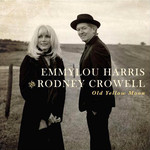 The first official collaboration from the duo since Crowell joined Harris' Hot Band as guitarist and harmony singer in 1975.

'Old Yellow Moon' is a new collaborative album from Emmylou Harris and Rodney Crowell. The 12-track duets album features four songs written by Crowell as well as interpretations of songs such as Hank DeVito's "Hanging Up My Heart", Roger Miller's "Invitation to the Blues", and Allen Reynolds' "Dreaming My Dreams", among others.

Produced by Brian Ahern (Johnny Cash, George Jones, Roy Orbison), 'Old Yellow Moon' is the first official collaboration from the duo since Crowell joined Harris' Hot Band as guitarist and harmony singer in 1975. In addition to Harris and Crowell, the album features world-renowned musicians including Stuart Duncan, Vince Gill, and Bill Payne, as well as members of the original Hot Band.

1. Hanging Up My Heart
2. Invitation to the Blues
3. Spanish Dancer
4. Open Season on My Heart
5. Chase the Feeling
6. Black Caffeine
7. Dreaming My Dreams
8. Bluebird Wine
9. Back When We Were Beautiful
10. Here We Are
11. Bull Rider
12. Old Yellow Moon