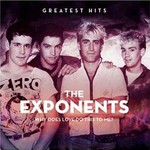 The Exponents
Greatest Hits: Why Does Love Do This to Me?

The 24 biggest songs from one of New Zealand's most loved bands - including "Who Loves Who The Most", "Victoria", "I'll Say Goodbye", "Christchurch", and "Whatever Happened to Tracey".

You only had to watch the All Blacks during the Rugby World Cup to know that New Zealand has two national anthems. At the final whistle of the NZ v Australia semi-final at Eden Park, 60,000 ecstatic kiwis burst into a mass chorus of the Exponents classic "Why Does Love Do This To Me" to celebrate another emphatic win by the All Blacks. Relayed through the television broadcast, New Zealand and the world could hear the song that, above all others, unites our nation and tells us it's time to party.

2011 marks The Exponents 30th anniversary and to celebrate, the band's anthem has become the title track of 'Greatest Hits: Why Does Love Do This to Me?' - a collection of the 24 biggest songs from one of New Zealand's most loved bands.

The album includes all the hits that have made the Exponents the most popular live act in New Zealand over the past 30 years - "Who Loves Who The Most", "Victoria", "I'll Say Goodbye (Even Though I'm Blue)", "Christchurch (In Cashel St. I Wait)", and "Whatever Happened to Tracey". Sitting alongside these (and many more) favourites is the brand new track, "It's Rugby", which was recorded specifically for this release. The album features a number of Exponents hits that will be available digitally for the very first time.

The Exponents are responsible for some of New Zealand's biggest sing along hits, and now they're all together in one complete package. Celebrate the band, their brilliant live shows, and 30 years of the most unforgettable songs with 'Greatest Hits: Why Does Love Do This to Me?'.