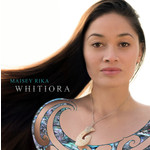 For her third studio album, Maisey worked with a wide range of Maori songwriters to create some angelic, original pieces.

Maisey Rika's third studio album, 'Whitiora' is a full Te reo album with 11 tracks. Maisey has developed her craft further as a singer-songwriter and works alongside fellow producer Mahuia Brdigeman Cooper. Songs include "Tangarao Whakamautai", the first single of the album which takes you on journey into the ocean and Maori legend. Other tracks include "Ruaimoko" featuring Anika Moa, which is a haunting reference to the Christchurch earthquake, mixed delicately with a string quartet. Maisey worked with a wide range of Maori songwriters to collaborate and create some angelic, original pieces.

'Whitiora' has a natural organic sound bed. Michael Barker (John Butler Trio) provides a wide variety of creative percussion on the majority of album, also Joel Haines returns with his high quality guitar work. Together with Maisey's outstanding voice, demeanor and timing, 'Whitiora' is treat for your ears.

Songs From the Inside (Digipak Edition)