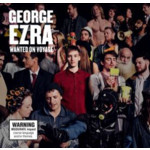 At 20, George Ezra has seemingly sailed in to his position as one of pop's most talked about new artists. He first came to attention when BBC Introducing in his adopted home of Bristol picked up a handful of tracks posted online.

That led to a live session at their legendary Maida Vale studios and an oversubscribed performance on their stage at the last Glastonbury Festival.

Following that, a shortlist in the BBC Sound of 2014, and Next Hype from Zane Lowe for the track Budapest has further cemented Ezra as one to watch.

Blame It On Me
Budapest
Cassy O'
Barcelona
Listen To The Man
Leaving It Up To You
Did You Hear The Rain?
Drawing Board
Stand By Your Gun
Breakaway
Over The Creek
Spectacular Rival
Song 6
It's Just My Skin
Da Vinci Rio Police
Blind Man In Amsterdam