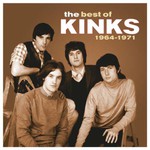 A million-selling band in their 50th anniversary, hailed as massive influencers on latter year Punk/Rock with an exhaustive list of bands up to current day citing them as a major influence, The Kinks songwriting genius and
musicianship continues to be enjoyed and marvelled around the world.

The Kinks are to celebrate the 50th anniversary of their very first number one "You Really Got Me" with an extensive re-release programme covering their classic 1964-1970 catalogue.

The Kinks sound-tracked the sixties with the number one singles You Really Got Me, Tired Of Waiting For You, Sunny Afternoon, and Dedicated Follower Of Fashion.