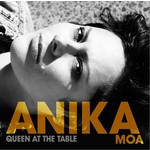 Anika Moa
Queen At the Table

Hot on the heels of the Tui Award winning album Songs For Bubbas (2014) featuring the APRA winning Children's Song Of The Year, Anika has turned her attention back to her never departing fan base with her fifth solo studio album Queen At The Table.

Queen At The Table was recorded at Auckland's The Lab studio with producer Jol Mulholland (The Mots, Gasoline Cowboy, Fuce, Mullholland) taking on production duties, giving the album a synthy, electronic touch and as always, Anika shines on Queen At The Table with her soaring vocals, tender voice and personal lyrics.