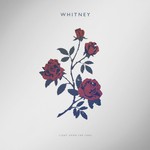 Whitney
Light Upon The Lake

To say that Whitney is more than the sum of its parts would be a criminal understatement.Formed from the core of guitarist Max Kakacek (ex-Smith Westerns) and singing drummer Julien Ehrlich (ex-Unknown Mortal Orchestra),the band itself is something bigger, something visionary, something neither of them could have accomplished alone.

Whitney was born from a series of laidback early-morning songwriting sessions during one of the harshest winters in Chicago history, after Ehrlich and Kakacek reconnected - first as roommates splitting rent in a small Chicago apartment and later as musical collaborators passing the guitar and the lyrics sheet back and forth. The duo wrote frankly about the break-ups they were enduring and the breakdowns they were trying to avoid. Each served as the others most brutal critic and most sympathetic confessor, a sounding board for the hard truths that were finding their way into new songs

"Ehrlich and Kakacek successfully eke out what is depressingly victorious and ultimately pyrrhic about abandoning the homestead for the mirage of greener pastures." - Pitchfork

"[Whitney]'s friendship and songwriting partnership is coming into its prime." - The Verge