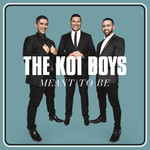 The Koi Boys
Meant To Be

Made up of Danny Faifai, Kevin Keepa and Ngahere "Nuz" Ngatai, The Koi Boys made their charismatic first appearance on this seasons The Voice Australia. The first ever trio to perform on the show, their energy, character, enthusiasm and genre-spanning talent made them a hit among fans, both locally and most recently across the Tasman. Knocked out before the finals. The band's eviction caused outrage on social media and had Jessie J fielding interviews surrounding her decision to send them home.

Their passionate fans stayed with them, following their live shows and online recorded performances. One of their videos on YouTube, a cover of Meghan Trainor's 'All About That Bass', has racked up over a million views.

Working with producer Robert Conley (Montaigne, Tina Arena, The Delta Riggs, Darren Hayes, Thelma Plum) Meant To Be ticks off Motown, funk, RnB, pop and more with a surprising cabaret-style cover of The Weeknd's 'The Hills', a smooth, Latin rendition of 'Hotline Bling' by Drake and of course, 'Sh-Boom (Life Could Be a Dream)' the song which made the four chairs turn around.

The highly anticipated release sees the Koi Boys first foray into songwriting. 'Yes, a sweet love song written by Kevin; 'Angels Have to Fly', a stunning reggae track written by Nuz after his cousin died from epilepsy and 'Meant To Be (Waiata's Song)' a heartstring-pulling ballad written by Danny with each song begun individually then together collaborating at the end.

Meant To Be is a collection of songs with one ambition: to entertain, because that is the one truth that lives at the heart of The Koi Boys.

Beauty Behind The Madness
more suggestions…