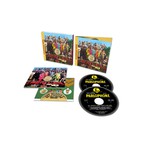 The album is newly mixed by Giles Martin and Sam Okell in stereo, sourced directly from the four-track masters and guided by the original, Beatles-preferred mono mix produced by his father, George Martin.