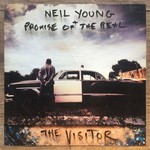 Neil Young + The Promise Of The Real
The Visitor

Neil Young reteams with Promise of the Real for a new album titled The Vistor, their second studio LP together. The album comes just three months after Young released Hitchhiker, his long-lost LP of acoustic songs recorded over one night in August 1976.
The Visitor is an intriguing and always exciting peek into the mind and heart of one of rock & roll's true seekers. Neil Young has wandered a wide path since coming to Los Angeles from Canada over 50 years ago. During those many decades he has established an immediately apparent individualism that cannot be predicted. Young has often said that when things become ordinary, he's ready to shake things up and head for new ground. It has always been what marks Young's music. His new songs, whether it's a mashup of spoken word and rock & roll on "Fly By Night" or the heart-stopping beauty of "Forever," once again ask listeners to stay open and ready for whatever comes through the open channels of the man and his unstoppable band.