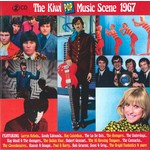 1967 was a pivotal year for New Zealand music - it was the last year where the independent labels ruled, as the multinational labels slowly took control. Some of our top artists were recording abroad with iconic producers-The Brodie Brothers with Mike Leander, The Human Instinct with Mike Hurst and Maria Dallas with Felton Jarvis. Ray Columbus was part of the San Francisco scene, where he rerecorded 'She's A Mod' and replaced the sound of the Invaders' Fenders for the jangly sound of the Art Collection's Rickenbackers. C'mon ruled our tv screens for 26 weeks, and featured all of our top bands and singers. Numerous national tours were undertaken by our biggest stars during the year, spearheaded by the C'mon and Loxene Gold Disc tours, which between them took 10 consecutive weeks. Larry's Rebels, The La De Da's, Sandy Edmonds and Maria Dallas all toured the country extensively with their own shows. Close to half of the single releases during the year were local compositions - a steady increase from previous years. For the first time, local records were being hailed by critics and fans alike, which saw an increase in local records gaining overseas release -spearheaded by The Avengers, who turned down an offer to both relocate to the USA and also record for MGM, who at that stage were the fourth biggest record label in the world. The Fourmyula won The Battle of the Bands at years end, which put in motion their successful recording career which started in 1968.

Future iconic Kiwis Bruno Lawrence and Dalvanius Prime made their vocal debuts during the year. NZ music turned a corner in 1967, and we've never looked back.

Top of the Dial: Music and Broadcasts From the Hauraki Good Guys

How Is The Air Up There? 80 Mod, Soul, RnB & Freakbeat Nuggets From Down Under
more suggestions…