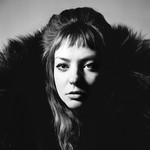 Olsen's bold and unexpected All Mirrors comes over three years after the release of My Woman, a top 10 critically praised album of 2016.