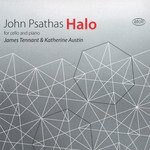 Commissioned by Ian Graham and Agi Lehar-Graham, Halo was written in 2014 for pianist Katherine Austin and cellist James Tennant, and was premiered by them in February 2016 in the Auckland Town Hall.

James Tennant and Katherine Austin are founder members of the New Zealand Chamber Soloists, and performers and teachers at the Conservatorium of Music, University of Waikato.

John Psathas is a freelance composer who lives and works in Wellington. He first rose to international prominence with his music for the ceremonies of the 2004 Athens Olympic Games.