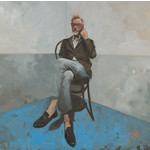 Of the album's origins, Berninger explains, "I sent [friend and collaborator Booker T. Jones] a few rough demos of originals that I had started working on with some old friends, including the songs 'Serpentine Prison' and 'Distant Axis.' Booker responded to those demos right away and encouraged me to keep writing and digging deeper into that stuff. Six months later we had twelve originals and seven covers. Everyone I had been working with on these songs came to Venice, CA, and we recorded it all in 14 days."

In addition to his duties as frontman of acclaimed rock group The National, with whom he won the Grammy Award for Best Alternative Music Album for 2017's Sleep Well Beast, Berninger also collaborated with Brent Knopf (Ramona Falls, Menomena) under the moniker El Vy for the 2015 release Return to the Moon. In 2019 Berninger appeared in Between Two Ferns: The Movie and teamed up with Phoebe Bridgers to contribute the song "Walking on a String" to the film's soundtrack.