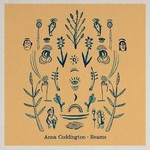 $26.00 In stock with supplier
ETA: 4-7 business days add to cart more by this artist

One of Aotearoa's most acclaimed singer-songwriters returns with Beams - her first new album in four years - which sees her exploring her place in the world as a human being, Māori, mother, musician and woman.

The album signals a new direction for Coddington, leaning into her indie sensibilities, while maintaining a pop edge.

Each track explores a different aspect of Coddington's personal life, and through that, exposes a plethora of universal, wonderful human emotions - described as "a wānanga of ruthless self-expression".