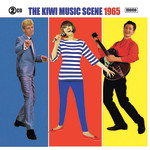 The New Zealand music scene came of age during 1965 with both the inaugural APRA Silver Scroll and Loxene Gold Disc Awards (a forerunner of the NZ Music Awards) held at the end of the year.
Although we didn't get our own official National music chart until early 1966, the seeds were sown in 1965. The Christchurch invasion of Australasia continued from the previous year with recent NZ Music Hall of Fame inductees Ray Columbus & The Invaders, Dinah Lee and Max Merritt & The Meteors once again leading the charge. During the first months of the year both The Rolling Stones and The Kinks toured the country and brought their R&B influences with them. The shows were attended by virtually every wannabe and soon to be musician in the country and their influence saw a rawer edge permeating into our music, as can be heard on this collection alongside a raft of perfect pop recordings encompassing all of the popular genres of the day. 1965 would also see a changing of the guard as a new wave of younger artists made their debuts during the year including Larry's Rebels, The La De Da's, The Chicks, Allison Durbin, Sandy Edmonds and Dave Miller. So to sum it up we can take pride in our 1965 music scene...we were doing okay and we were starting to write more of our own music.