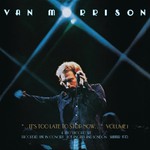 Van Morrison
It's too Late to Stop Now

Often cited as one of the best live albums ever made, Van Morrison's original ..IT'S TOO LATE TO STOP NOW … has been remastered in 24-bit high across two CDs.

Morrison's highly acclaimed 1973 concert album was compiled from eight sets of live performances - recorded at The Troubadour, the Santa Monica Civic Center and The Rainbow Theatre - and was notably free of any post-performance overdubs or studios "fixes".

Together Through Life
more suggestions…