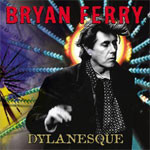 Ferry has always had an infinity with and a penchant for covering Bob Dylan songs and here he is performing 11 of them, in his own inimitable fashion.

'Dylanesque' is Bryan Ferry's first solo album since 2002's 'Frantic' and it showcases what Ferry does best - covering great songs in his own inimitable fashion.

Ferry has always had an infinity with and a penchant for covering Bob Dylan songs which stretches back to his legendary version of "A Hard Rain's a-Gonna Fall", a top 10 hit in 1973.

This album was recorded by Bryan's touring band and was produced by Bryan along with long time collaborators Rhett Davies and Colin Good. Ferry recorded around 20 Dylan songs, of which 11 appear here.

"I get the feeling people expect something fairly refined from me. My voice has gotten deeper and the album's got an element of roughness to it and, I hope, a kind of haunting quality. The singer in me is overjoyed to be singing these songs"
- Bryan Ferry