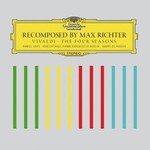 Antonio Vivaldi (1678-1741) wrote the four violin concertos known as Le quattro stagioni - "The Four Seasons." Today The Four Seasons may be the most widely heard piece of classical music ever composed.

Max Richter, the award-winning British composer who has written concert music, film scores, and a series of acclaimed solo albums, has rewritten The Four Seasons with stunning results. Richter's co-conspirators on Vivaldi Recomposed are Daniel Hope, the British violinist; the German conductor André de Ridder; and the Konzerthaus Kammerorchester Berlin. A former member of the Beaux Arts Trio, Hope is both a notable champion of contemporary music and an exponent of the standard classical repertoire. That makes him the ideal soloist for Richter's piece.

"Richter slips softly back and forth between writing art music and film scores. Here, Vivaldi's harmonies are slowed to one or two chords per movement and melodic fragments are frozen and filleted"
(The Independent)

"I anticipated hating this postmodern reworking of The Four Seasons by the film composer Max Richter. But it is so wittily done that I was gripped, if not quite enchanted."
(The Times)