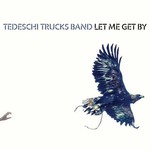 Tedeschi Trucks Band
Let Me Get By

Let Me Get By features ten new, original songs that together stand as a testament to the hard work, independent spirit, and full-on commitment of the entire Tedeschi Trucks Band. The album's artwork-a Mongolian golden eagle pictured a moment after flying from its handler's glove-and even the album title itself reflect the sense of total dedication that serves as the driving force behind this recording. From that wellspring of dedication come the most powerful TTB recordings yet. Susan's vocals and Derek's guitar soar, tumble and glide through each song, as powerful as ever, even in the album's most understated moments.

Let Me Get By is an album of firsts - in addition to being the first TTB record Derek produced on his own (with the contribution of Doyle Bramhall II performing/co-producing on three tracks), and the first on which he and Susan co-wrote all the songs within the TTB family, it's Derek's first album since his 15-year run as a member of the Allman Brothers concluded when the group disbanded last year, providing time for Derek and engineer Bobby Tis to spend countless hours in the studio honing the sounds and arrangements for this album. It's also the first lead vocals on a TTB album for Mike Mattison, whose songwriting and harmonies have always been one of the defining features of the band's albums. Finally, it's the first album with Tim Lefebvre on board, whose deeply propulsive bass lines drive the rhythm section in exciting new directions on record.

Each and every member of the band contributed in the recording process: there's Kofi's melodic keyboard wizardry, the perpetually locked-in drums and percussion of J.J. and Tyler, the always-punctual horn lines from Kebbi, Maurice and Saunders, and the rich blend of the harmony vocals from Mike, Mark and Alecia. Each individual personality has a chance to shine on Let Me Get By-even the crickets behind the studio lent their voices to the album, firmly connecting the band's music to the Jacksonville swamps from which it emerged.