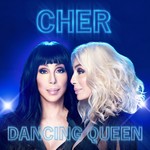 The one and only Cher is releasing Dancing Queen, a new album of Abba hits!

The Oscar, Emmy and Grammy Award winning icon was inspired to record the album following her stunning performance in the recently-released mega-hit film, Mamma Mia! Here We Go Again.

Dancing Queen was recorded and produced in London and Los Angeles with Cher's long-time collaborator Mark Taylor, who previously produced Cher's global smash "Believe", which was number one in over 50 countries.

Young As The Morning Old As The Sea
more suggestions…